Tide’s Tragedy: How Brands Can Respond to Disasters that Aren’t Their Fault

So far, 2018 has been a stressful and strange year for Tide. The Procter & Gamble-owned brand has been very present in the media lately for sending several people – most of them young– to the hospital. It has gotten so out of hand that some stores are actually locking up their Tide Pods, as though they were Pseudoephedrine or a similarly useful-but-dangerous-in-the-wrong-hands type of product. 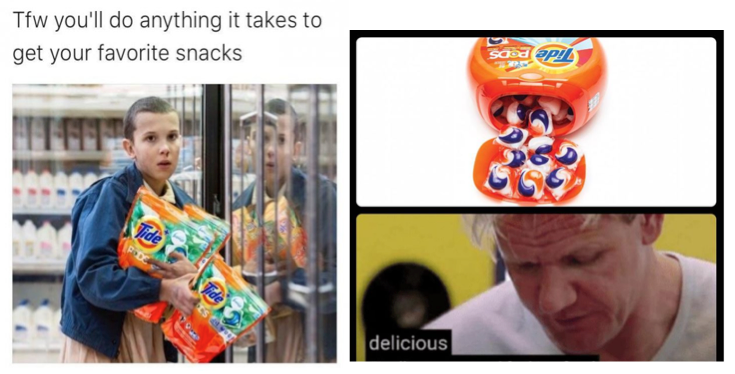 Procter & Gamble recently responded to the deadly meme with a social media public service announcement, starring Rob Gronkowski of the New England Patriots. In it, he vehemently tells viewers to “use Tide Pods for washing, not eating.”

Still, with their name all over the news and dozens of articles associating them with poisonings, what exactly can Procter & Gamble do to clear Tide’s name?

One possible course of action is to alter the product and reformulate to be nontoxic – or, at least, a lot less toxic. In the 80’s, Johnson & Johnson had to deal with consumer fears about Tylenol, after a murderer laced several extra-strength capsules with cyanide and left them in stores for unsuspecting shoppers to buy.

The role that Tylenol played in the victims’ deaths was not the company’s fault, and yet they still pulled $100 million worth of bottles from shelves, got involved with the authorities tasked with investigating the poisonings, and offered a $100,000 reward for information about the sinister act. Most importantly, when Tylenol was reintroduced, it was with new packaging that was designed to be tamper-resistant.

Johnson & Johnson was deeply admired and respected for their commitment to the case and to future consumer safety. The incident is a very commonly used case study in business schools, as their work is considered a model response to such a tragedy. Tide could learn from this and demonstrate their own strong feelings toward protecting shoppers and their families by openly working towards a safer product.

Much more recently, Walmart has announced a free program for people who use the store’s pharmacy to fill opioid prescriptions. The program uses DisposeRX, a powder that, when combined with water and leftover opioid pills, turns the drug into a “useless gel” that can be disposed of safely.

While nobody seems to have been pointing a finger at Walmart specifically during the current opioid crisis, many people have been questioning what role the private sector can play in helping to curb addiction. By encouraging responsible drug disposal, Walmart has earned themselves a lot of public goodwill and has positioned themselves as an active fighter during this epidemic. Procter & Gamble could follow Walmart’s lead by spearheading public health initiatives with the CDC and/or U.S. Poison Control Centers, or by publicly donating to poison-related awareness campaigns.

It is an unfortunate reality of business that sometimes, even when a brand has done nothing wrong, the company still has to respond to some kind of PR disaster. By carefully assuming responsibility and by proving to the public that they are taking important steps to combat the problem, brands can pull themselves out of holes that they should never have been forced into in the first place.

Measuring the Impact of Package Design

Why Target’s Private Label Strategy is So Successful