Shepard Fairey, born Frank Shepard Fairey, is an American contemporary street artist and graphic designer. While he started on the skateboarding scene, he has since created a name for himself in many circles.  His work combines graffiti, pop art, graphic design, and wheat pasting (using a water and wheat mixture to adorn posters to public spaces).

While he is considered an influential street artist, his work can also be found in a number of museums around the world, and on the covers of reputable magazines, album covers, and more.  His work is also featured in a number of publications, including “Supply & Demand: The Art of Shepard Fairey”.

Fairey is featured extensively in the Banksy documentary, “Exit Through the Gift Shop”.  Fairey’s likeness also appeared on a 2012 episode of “The Simpsons”, titled “Exit Through the Kwik E-Mark”, along with Robbie Conal, Kenny Scharf, and Ron English. 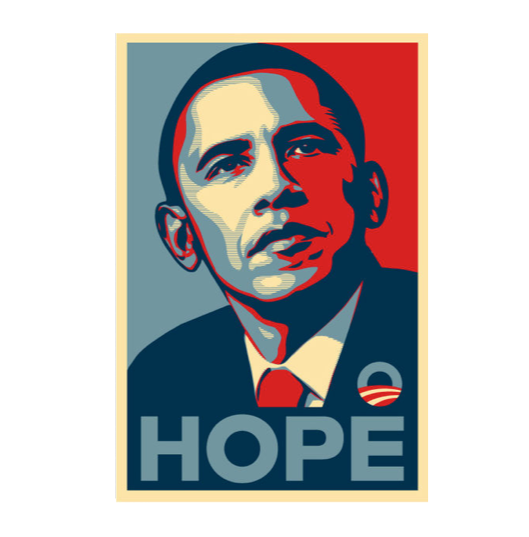 Shepard Fairey is most commonly associated with the Obey Giant campaign, featuring Andre the Giant, which originated in 1992. Although he had only recently become a graffiti artist, he took advantage of the visually striking image and took his stencils and stickers to the street.

He gained a great deal of respect after the release of his Barack Obama “Hope” poster, which was released during the 2008 presidential election.  This poster introduced a completely innovative branding tool into the world of political campaigning – street art and pop culture.  The poster originally had the word “Progress” captioned, but the campaign requested that he change the word to “Hope”. Two additional posters also feature the words “Change” and “Vote”.

To create the infamous “Hope” poster, Fairey played on the colors of the American flag, with “Hope” drawn in bold letters. He utilized his standard cream and red colors, but played with different shades of blue until he found the perfect hue to convey the right combination of aesthetics and patriotism.

Fairey most commonly uses stenciling, collage, and screen printing to create his work. He has found great success in creating images that can’t be ignored and using repetition to get his message across. By simply plastering posters, stickers, and stenciled images on public spaces, he has made himself a household name with street artists, designers, and the public at large.