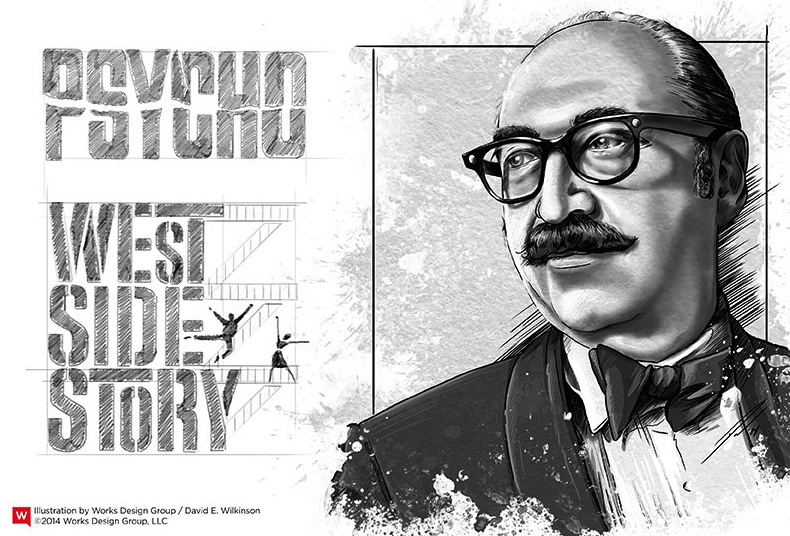 Saul Bass was an esteemed graphic designer and filmmaker who created some of the most iconic film posters, corporate logos, and title sequences in history.  He also accrued a number of honors, recognitions, and achievements during his lifetime, both in the design community and in Hollywood.

Saul Bass is best known for his visually striking film posters and artwork. He is also credited as being one of the first artists to realize the potential of beginning and ending movie credits and utilized the title sequence to set the film’s tone and mood.

His body of work consisted of logo designs, short films, commercials, posters, key art design, title sequences, and television. He worked with some of Hollywood’s most acclaimed filmmakers and was regularly contracted by Alfred Hitchcock. In fact, Bass was known for helping create some of the most memorable title sequences and controversial scenes, including the infamous “Psycho” shower scene. Some film books even credit him as co-director of “Psycho”.

Bass also created some of the most iconic logos of our time, including Quaker Oats, AT&T, Bell Telephone, United Airlines, Continental Airlines, and more. His legendary art has served as the inspiration for a number of works today, including the “Saul Bass Font”. His illustrations are also featured in various publications, including “Saul Bass: A Life in Film and Design,” and serve as inspiration for many graphic design and poster design pieces today.

Bass’s simplified thoughts on design were: “Design is thinking made visual.” He also gave the following insight into his design strategy: “Sometimes when an idea flashes, you distrust it because it seems too easy. You qualify it with all kinds of evasive phrases because you’re timid about it. But often, this turns out to be the best idea of all.”

He worked to create art and film pieces that enhanced the viewer’s experience. His film posters were able to convey all of the important elements of the film in a striking, simplified design.

Bass passed away in 1996, but his work lives on and is still widely respected today.