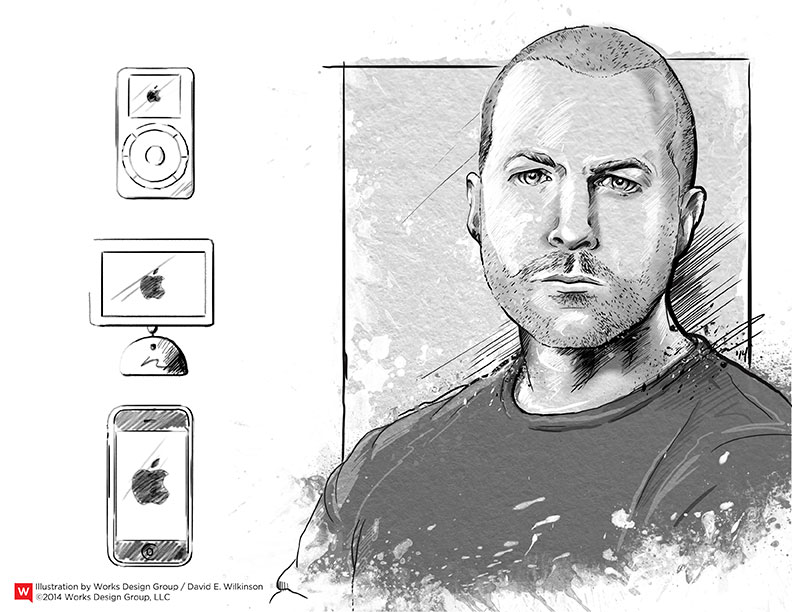 Jonathan “Jony” Ive is Apple’s Senior Vice President of Design. His collaboration with Steve Jobs produced some of the world’s most iconic product designs, including the iMac, Apple TV, Mac Book Air, Powerbook G4, iPhone, iPod, and more. Ive  played a huge role in helping reverse a long decline and bringing the company back from the brink of bankruptcy. Along the way, he created one of the most recognizable and powerful brands in the world. Jonathan lived most of his life in London, but moved to the United States to work for Apple in 1992.

Ive works in a top secret design studio that is described as a noisy and chaotic place that plays techno music and sees designers skateboarding, playing soccer, and enjoying life. He has the only private office at the Apple design studio and works out of a glass cube that has just a desk, chair, and lamp. His office is so restricted that most Apple employees and execs, and even his own wife and children, are not allowed inside.

Ive is most well known for his work with Apple. He has been with the company since 1992 and has served as an integral part of making the company into the global powerhouse it is today. He was also responsible for the iOS 7 design, which has greatly influenced the design world as we know it, leading to more flat, simplistic designs.

He has been recognized with numerous design awards and his work has been featured in respected museum collections worldwide. He also earned a place on the 2013 Time 100 list.

Ive sites that he is greatly influenced by Dieter Ram, a legendary industrial designer who created several products for Braun, as well as the “10 Commandments in Design”. Both Ram and Ive were guided by simplicity and honesty of product design. Ram even said that Apple is one of few companies that design products according to his 10 principles of good design.

Ive was also naturally inspired by his father, Mike Ive, who helped create a mandatory design and technology curriculum for schools throughout the UK. His work and teachings have helped shape renowned British designers for years.

In a world of monotone computers, Ive brought color and transparency to the materials used to create eye-catching products. He was the one who pushed Apple to make their products white because most of the things he produced at his British design school were white. To create a successful product, he combined a simplistic, minimal design with aesthetically pleasing elements that set it apart from competing products.

Ive explains: “‘Different’ and ‘new’ is relatively easy. Doing something that’s genuinely better is hard.’ He worked to create designs that combined simplicity and emotion to create an experience for users.