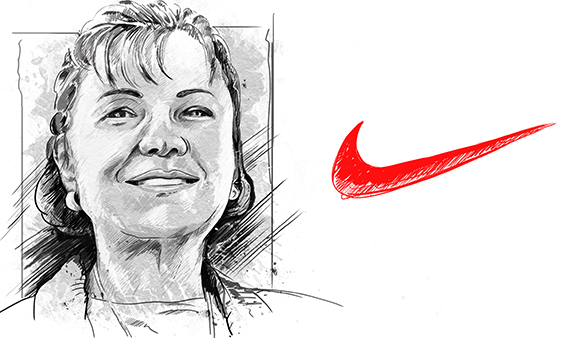 Carolyn Davidson is a renowned graphic designer, and the creator of the swoosh logo that has appeared on millions of items for more than 40 years. Her work has been featured on sneakers, hats, shirts, sports gear, and countless other consumer products, while being endorsed by athletes and celebrities around the world.

Davidson is most well known for designing the iconic Nike “swoosh” logo. She designed the simple logo in 1971, while she was still a graphic design student at Portland State University. The only advice she received was to create a striped design that was supportive of the shoe.

She was paid $2/hour for her work, for a grand total of only $35.  And this for a logo that would help to create one of the most recognizable brands in the world. In 1983, in recognition of her contribution to the company, Nike gave her a diamond Swoosh ring and a few hundred shares of stock for her work (now worth more than $600K).

The original logo included the Nike name, but today features the solo swoosh that most customers have come to know and love. Nike used the stand-alone swoosh as a form of debranding and gaining brand recognition.

Davidson needed to find something that was different from competitors’ logos, like the recognized Adidas striped logo. She needed to create a logo that was original and conveyed movement and motion.

She sketched potential logos by hand on tissue paper and laid them out over a drawing of a shoe to see what the logo would look like on the finished product. She presented several designs to Nike and they eventually settled on her favorite design, the swoosh. Phil Knight, the founder of Nike, originally said of the logo: “Well, I don’t love it, but maybe it will grow on me.”

The logo has helped to create a global brand that is now worth approximately $67 billion.