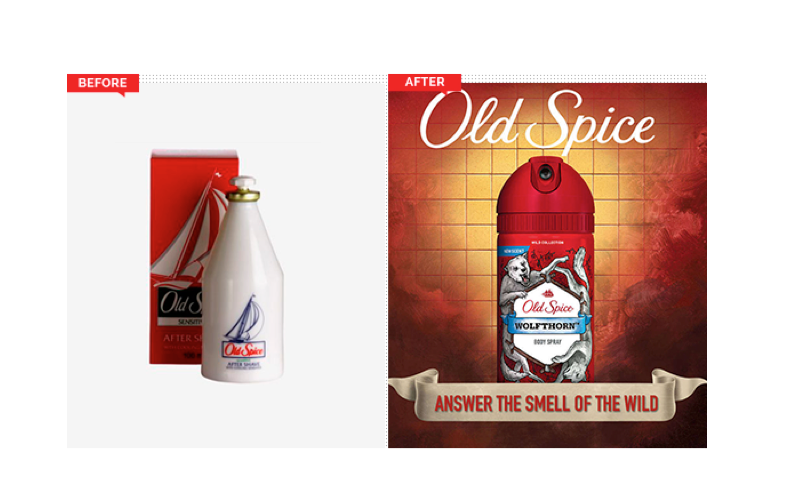 Procter & Gamble’s Old Spice has served as an internationally recognized men’s grooming brand for more than 70 years. Throughout the years, they have aimed to bring the best male grooming products to men of all ages, but were becoming stale with the younger generation. To catch up with the changing market, they launched one of the most successful rebrands of the decade.

Featuring new commercials, new packaging, a new site design, and a complete upheaval of their entire marketing scheme, Old Spice completed a full rebrand in an effort to attract a broader, younger customer base. From the introduction of “The Old Spice Guy” to the assortment of witty, comical commercials and must-see viral videos that began in July 2010, they garnered the attention of their target audience both on television and on social media networks.

To complete such a successful rebrand, Old Spice worked with Interbrand to determine what it would take to bring the brand into modern times. In the summer of 2011, they also teamed with advertising great Wieden + Kennedy and the creative minds at Landor  to create a campaign that would foster a strong relationship between Old Spice and their customers. They worked to build a strong online and social media presence to attract new customers and update their packaging to suit customers’ changing preferences.

The ultimate goal was to target Millennials because both older men and teenagers want to feel like they are in their 20s, so this marketing campaign appealed to more than just the Millennials. In only one short year following the rebrand, sales increased by more than 100%.

Old Spice created an interactive website and eye-catching packaging design using new colors, typography, and graphics. The more modern imagery has placed Old Spice in the running as the best male grooming products for men ranging from older gentlemen to teenage boys. They have also intensified their mobile marketing efforts because research has shown that more people are willing to accept ads via their mobile device.

This hugely successful rebrand has honored the original customers while attracting a new demographic of younger men. In fact, following the implementation of the new packaging design, Nick Patterson, Associate Director of Shopper Marketing at Procter & Gamble, stated that “Old Spice was reinvented and became one of the fastest growing brands in the category.”

Following the redesign, Old Spice has taken many other efforts to attract customers, including hiring a new marketing director and partnering with other notables and celebrities for wildly successful online and design campaigns. They have offered a noteworthy example of how branding and packaging makeovers can create significant market change.