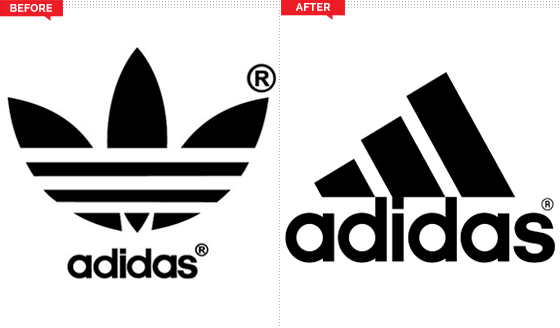 Adidas is the largest sportswear manufacturer in Europe and the second largest in the world. They offer quality sportswear, footwear, and other products like bags, watches, eyewear, and more. Adidas is well known for proudly displaying three parallel bars down the sides of their pants, shoes, apparel, and accessories. They began using the 3-stripes mark in 1967, so it was only natural that it would become recognized worldwide as the Adidas signature symbol.

In 1997, Adidas revealed a complete rebrand, including a new logo. This marked the first new logo since the original trefoil logo was introduced in 1972. The trefoil logo is still displayed on some classic products, but most products and branding have been moved over to the new three bars logo.

Adidas was founded by Adolf (Adi) Dassler, who began producing shoes in the 1920s with his brother, Rudolf Dassler. Rudolf later left to form his own rival shoe company, Puma. Following the departure of his brother from the company, Adi changed the name from “Dassler Brothers Shoe Factory” to “Adidas”, based on his own nickname. The original logo was also created by the brothers. In 1997, the three striped logo was re-introduced after it was edited by Peter Moore, creative director of Adidas at the time.

In the new logo, the original three stripes remained, but were turned on a diagonal. The shape formed by the bars is also intended to represent a mountain and the challenges and adventure it presents. Everything from the black color to the image have been carefully chosen to help motivate and encourage athletes and beginners alike.

The iconic stripes remained; the brand just received an effective upgrade. Most people can instantly recognize the logo and have built a trusted relationship with the brand. The logo is simple, yet striking and has helped to build a powerhouse brand over the years. While the brand has taken different marketing strategies over the years, one thing has remained the same – the iconic 3-stripe mark.